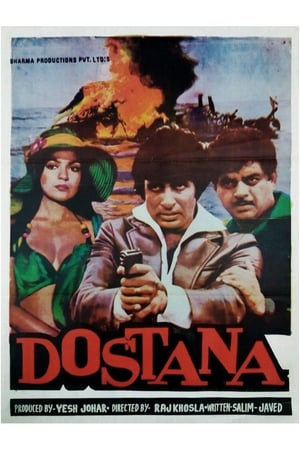 Movie: Friendship (1980)[143844] Vijay and Ravi are best friends (hence the name 'Dostana') who do not even question each other about their careers. Vijay, a police officer and Ravi, a lawyer, while the former catches the criminals who smuggle, Ravi on the other hand bail those criminals, employed by Daaga. One day, both Vijay and Ravi meet Sheetal at different places and times, and both fancy the same girl, Sheetal, but Vijay's love was more serious. Ravi admits his love for Sheetal to Vijay and is devastated but Vijay decides to sacrifice his love and give Sheetal's hand. However, there was a misunderstanding when Daaga decided to stir up Vijay and Ravi's friendship by showing a photo of Vijay and Sheetal to Ravi. They became rivals for the first time and Ravi started to turn to be an enemy of Vijay. Do their friendship recover? Does Ravi get to know the truth? Do Sheetal get back with Vijay?

You must be registered and logged in to submit your review.